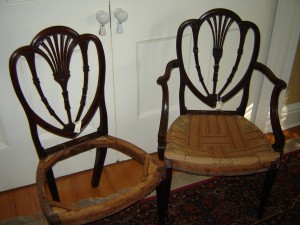 Pictured are two heart shaped New York shield back chairs from Wilderstein Preservation’s collection.  Both chairs were in poor condition when I received them.  The side chair had a broken out back section.  The pieces were all there except for one small piece of mahogany at the top right.  The arm chair  had one of the carved spindles broken out.  Both were very dirty having been in storage for years. After examining both I determined that the side chair had old repairs, had been stripped and had no finish remaining.  The armchair retained an old finish (perhaps original).  The armchair had evidence of having repairs to the arms where they had been reatttached to the frame.  The finish had been touched up, but for the most part was stable.  I cleaned nad repolished the frame, did minor touch up, and gave a the chair a light coat of wax.   The side chair did not have a finish.  After doing the necessary repairs, reglueing, and adding the missing piece of mahogany, I padded on a shellac finish.  This was rubbed down to match the sheen of the armchair.  The seat molding at the rear back of the upholstery was missing.  This was duplicated and matched to the existing one on the armchair.  At some point corner blocks were added to the corners of frame.  I left these as they were secure.  The brass tack trim that originally decorated the upholstery of the chair had shattered much to the wood on the edges.  I reglued damaged areas and filled tack holes with a glue sawdust mixture for added strength.  This was done to insure the next upholsterer would not run into problems.  Horsehair upholstery is planned for the chairs.  Brass tacks will also be used to decorate the sides of the seat upholstery.  Nail hole “ghosts” indicate  a swag decoration running along the front of each chair.

I've been selling and restoring antique furniture in Dutchess County since 1984. I've specialized in selling 18th and 19th century furniture,art, and objects.

I display my wares at the Beekman Arms Antique Market in Rhinebeck, New York. One of the oldest antique centers in the area, it is located behind the historic Beekman Arms Inn, the oldest Inn in America.  I've included pictured items on my site for sale.

Prices listed do not include shipping or 8.125% New York sales tax (unless you have a valid New York State resale number). I use The Country Postman for shipping.